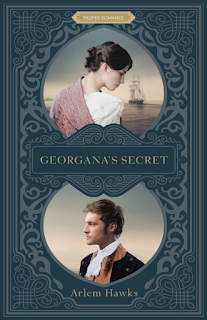 GEORGANA'S SECRET by Arlem Hawks. Wow. What a different way to have a love story. It was so fun to get to see the view from a ship in that time. And to have a woman pose as a cabin boy would be crazy, not only today but especially then. I loved to see how the ship was run and the true kindness in most people's hearts. I loved Lieutenant Peyton taking the cabin boy under his wing and the budding romance that developed in disguise. In the end, it's a perfect match for so many reasons. This would be a great story to kick off the new year with.

Georgana Woodall dreams of freedom—freedom from her past and freedom from her secret. She has been living on her father’s ship for years, disguised as a cabin boy named “George.” But hiding her true self is becoming more difficult, and she yearns to break free of her life on the sea. She’s already missed too many seasons in London, and her chances of being welcomed back into polite society and finding a suitable husband are slipping away.

Lieutenant Dominic Peyton has no time in his life for love, not with his dedication to His Majesty’s Royal Navy claiming his full attention. Determined to prove himself to his new captain, he strives to be an exemplary officer and leader. When Lieutenant Peyton sees the captain’s cabin boy being harassed by the crew, he takes the boy under his wing.

Georgana quickly loses her heart to Dominic’s compassion and care, but needing to maintain her disguise as a cabin boy, she is convinced nothing can come of her affection.

Georgana’s Secret is about two hearts yearning to find a safe harbor, and possibly, a lasting love.