WRONG FOR YOU by Jenny Proctor 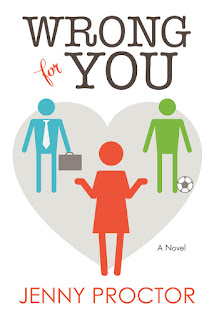 WRONG FOR YOU by Jenny Proctor. This was such a fun read. I loved everything about it. The setting was perfect as were the characters. Lane's take charge, get involved attitude had me on her side from the very beginning. Both Jaime and Simon were endearing in their own ways, and I wasn't sure who I wanted her to end up with through most of the book. But in the end, she ended up with the right one. The flow of the story had me turning pages late into the night. It is a fantastic read for any and everyone. I highly recommend this book to any and everyone who loves a good story.


Lane Bishop is a hardworking, intelligent, beautiful young woman. And with her recent move to Chapel Hill, she is determined to leave behind the drama and effort of keeping up with the dating scene. Even so, Lane somehow manages to get dragged out by a gaggle of girls to go watch boys play soccer. Just watching is not Lane's forte, so she joins in the fun and leads her team to victory.
Rather than feeling intimidated by the vivacious beauty on the opposing team, Jamie Hamilton is intrigued. Risking his "untouchable" dating status, he decides to pursue Lane—with a little help from his older brother Simon. With Simon's behind-the-scenes assistance, Jamie proves irresistible, even to a disillusioned dater like Lane. But as she gets to know both brother, Lane can't help but wonder—beneath the grand gestures and romantic words, is she falling for the wrong guy? 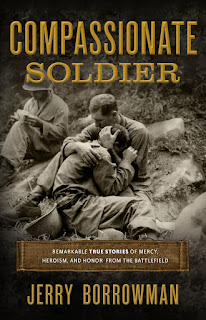 COMPASSIONATE SOLDIER: REMARKABLE TRUE STORIES OF MERY, HEROISM, AND HONOR FROM THE BATTLEFIELD by Jerry Borrowman. This was a fascinating book. It covered stories from all of the wars that are not commonly shared. These stories show the true character of people, their dedication to serving their fellow men even with their own lives at risk, their innate desire to do what they believe is right despite all odds, and many other things that restore faith in humanity. I thoroughly enjoyed joined reading each story, shaking my head in awe of these people and what they did. True heroism, mery, and honor from the battlefield. I highly recommend it to anyone, especially those who love the different war eras.


Compassionate Soldier illuminates fascinating yet largely unknown stories of men and women whose humanity led them to perform courageous acts of mercy and compassion amid the chaos and carnage of war. Arranged by war from the American Revolution to the Iraq War and global in perspective, it features extraordinary stories of grace under fire from valiant soldiers and noncombatants who rose above the inhumanity of lethal conflict and chose compassion, even knowing their actions could put their lives and liberty at risk.
Included are the stories of Patrick Ferguson, a British officer during the American Revolution who had the chance to kill George Washington but refused to shoot a man in the back; Richard Kirkland, a Confederate soldier during the Civil War who took water to wounded Union soldiers during the battle of Fredericksburg; and Oswald Boelcke, a German WWI flying ace who was one of the most influential tacticians of early air combat and was known for making sure the airmen he shot down made it to the ground alive.
These and other inspirational stories illustrate that even in the midst of the unspeakable horrors of war, acts of kindness, mercy, compassion, and humanity can prevail and, in doing so, expand our conventional thinking of honor and battlefield glory.
Posted by Bonnie Gets A Say at 4:00 AM No comments: