ONE FELL DOWN by Ronda Gibb Hinrichsen 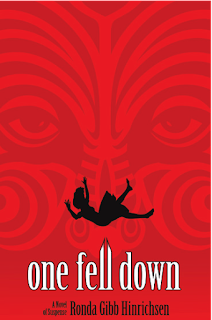 ONE FELL DOWN by Ronda Gibb Hinrichsen. There are many books that I end up skimming through a lot of the story. This was not one of them. I found that I was reading every word. The story enthralled me and I truly couldn't put it down. The mystery to solve was well done and had me guessing as to who the murderer was, and most of the time I didn't have it correct. I loved being in New Zealand with a different culture that I wasn't familiar with. The characters were well developed and easy to relate with for the most part. It was a fantastic read that anyone who loved a good mystery/suspense novel, with a bit of romance, will love.


When Mikaela York opens an anonymous blue sympathy card with the nursery rhyme "Jack and Jill" written inside, she doesn't know what to make of it. But soon after, Mikaela and her fiance are in a tragic car accident, resulting in her husband-to-be's death. Then when Mikaela's grandmother loses her life in a hiking accident one year later, an old man gives Mikaela another mysterious blue card at the funeral.
After the service, Mikaela's grandfather asks that she oversee the renovations on his bed & breakfast in New Zealand. When she arrives, Mikaela meets Tui Davies—the inn's manager—and Brentin Williams, the man Tui expects her daughter to marry. Tui helps Mikaela retrieve a doll from the cellar vault, but the doll turns out to be an evil omen that Mikaela is told she must get rid of before someone is murdered.
Meanwhile, the old man from the funeral is bent on revenge and is plotting against everyone who has ever wronged him, and Mikaela is next in line. But until she discovers the killer's contact in New Zealand, who can she trust? And while Brentin attempts to help Mikaela overcome her grief, she must decide—is she ready to love again? 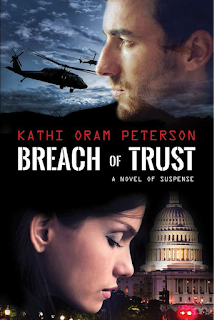 BREACH OF TRUST by Kathi Oram Peterson. I have always enjoyed military, suspense novels and this one was a good read. The characters were easy to become attached to. The story was page turning and kept me reading through most of it. It was a very tangled web that needed to be sorted it out. There were many red herins, almost too many in a way. (Of course it could have been because I had to keep turning pages and it ended up being a really late night.) I thought I had it figured out a few times, but after being wrong I gave up and just read the story. I would recommend it to almost anyone. Since it does deal with war situations, it wouldn't be good for younger readers, in my opinion.


Lieutenant Commander Cooper Lane has so much to live for. With a loving husband and beautiful baby girl waiting for her back home, she is anxious to finish her mission in Afghanistan and return to her family. But in a split second, her world shatters. Her helicopter is going down in that hostile country, and there will be no survivors.
Four years later ...
On a covert mission in an Afghan village, Navy SEAL Axe Talbot finds something no one ever expected: Lieutenant Cooper Lane—alive. Cooper survived the crash that killed her team and has been hiding behind enemy lines for four years. It's the woman he's been looking for and dreaming about for so long.
After her rescue, Cooper is not sure she can survive the reality waiting for her back home—when she disappeared and was pronounced dead, her husband married her best friend. Cooper is lost, but her troubles are just beginning. in one horror-filled moment, her former husband is murdered before her eyes, and Cooper becomes the prime suspect. Now she must embark on one last mission to clear her name. And there are only two people she trusts to help her: her father and Axe, the SEAL who rescued her. Cooper and Axe take off, and together the makeshift team uncovers a trail of mysterious deaths that leads to unimaginable danger.

AN INCONVENIENT ROMANCE by Chalon Linton 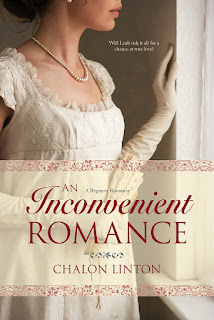 AN INCONVENIENT ROMANCE by Chalon Linton. This was a very cute story. I had a smile on my face through most of it. I liked the how the stakes kept getting higher. The character development was great. Once I got past the Prologue, which had some POV issues, the story flowed nicely. There were a couple more places that had POV issues, but overall it was a wonderful story that I would recommend to anyone who enjoys a good regency romance.

The countryside of England provided an idyllic backdrop for Charles Brumley’s and Leah Hastings’s childhood. Neighbors and best friends, the pair passed many happy days racing through the rolling hills of Derbyshire. Everything was perfect—until Charles ruined it all and abandoned Leah for university. Six years later, the former friends are thrust into each other’s paths once more. Leah had been looking forward to the ball, an opportunity to further her acquaintance with the handsome Mr. Wilkins—but when she sees Charles’s familiar face through the crowd, her traitorous heart leaps. Charles faces his own struggle: he has loved Leah since he was fifteen years old, yet it seems he is too late—it appears that her affections are otherwise engaged. As the pair tentatively renews their friendship, the spark between them is undeniable. After so many years apart, Leah endeavors to reconcile her feelings toward her once cherished companion. But when a conniving rival for Charles’s attention approaches Leah, the threat is clear: give up her association with Charles or a devastating secret about her family will be revealed. Faced with an impossible decision, Leah must make a choice—the ruin of her family or the ruin of her heart?