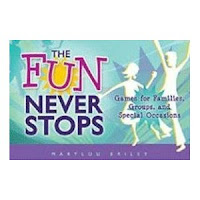 Here's a great book for all you game lovers out there. The Fun Never Stops by Marylou Bailey is a collection of games for all occasions. There are word games, art games, paper games, food games, small and large group games, just about any combination you can think of. Recipes are included, supply lists and ideas if you're drawing a blank. Anything you need is given. The Fun Never Stops. And this is just one of several game books Marylou has published. Take a look and let the fun begin! It is available here at Amazon.
Posted by Bonnie Gets A Say at 1:26 PM No comments:

Happy Thanksgiving! What a wonderful day to remember those things we have been blessed with. I am so incredible grateful for . . .
. . . and the list goes on! Take a moment to remember what you are thankful for and share if you'd like. :)
Posted by Bonnie Gets A Say at 7:42 AM No comments:

Here's a book for all you who love genealogy. Anne Bradshaw has a new book out entitled True Miracles with Genealogy-Help Beyond the Veil. In her own words, Anne describes her book as "a collection of inspiring research stories, spiritual moments as help comes from beyond the veil. It is unique, comforting, and powerful. Each account can't help but touch hearts as readers come to the heady realization that there really is a world of spirits. . . . Compiling it was truly an amazing experience."
As one who has family who really enjoys genealogy, this book sounds like an amazing and inspirational read. The stories of those around me involved with genealogy make me want to do better at finding my ancestors. Here are some additional reviews.

"There aren't enough collections of these stories, and I, for one, am very grateful to Anne Bradshaw for compiling a few more of them. They truly do touch and encourage and uplift, and having read the book, I am once again inspired to try a little harder on my own 'blind alleys.'" ~ Kathleen Dalton-Woodbury for the Association for Mormon Letters

"Anne Bradshaw’s book is not a genealogical how-to manual. "True Miracles with Genealogy" is a worldwide collection of astounding personal stories that illustrate the remarkable assistance available to us when we combine diligent research with help from beyond the veil." ~ Laurie L.C. Lewis, Author.

"True Miracles with Genealogy~Help from Beyond the Veil" is a collection of research stories written by ordinary people with extraordinary experiences. These events are part of the reward that comes from doing genealogy. They are the fathers turning their hearts to their children—the spiritual moments as help comes from beyond the veil. Each account is unique. Each is a miracle. Each will inspire readers as they come to the heady realization that genealogy is more than it appears to be, and there really is a world of spirits.

"'Sometimes we forget how close Heaven is to Earth—just a whisper away' ~ Elizabeth Jane Roberts. This is the kind of comfort offered by True Miracles with Genealogy. Personal story after story rivets your attention. This book is a powerhouse of inspiration—an absolute must-read to keep on your nightstand." ~ C.S. Bezas, Author and Columnist

"Whether you've been doing your family history for years, or have just started, or just enjoy reading about the process, you'll find something to delight and inspire you in this remarkable work." ~ Tristi Pinkston, Author

For more information, check out the website specifically for True Miracles. Here's a link to the book trailer and where you can purchase it.

Here's something interesting I ran across, actually the credit goes to Rachael Renee Anderson but there's going to be a fun little thing going on at the Best I've Read 2010. Nine blogs have gotten together and have complied lists of the top books that have made it on their reading list. Between December 6 through the 14 there will be prizes, info, and lots of other things going on. Sounds like a lot of fun.
Posted by Bonnie Gets A Say at 9:57 AM 1 comment:

Christmas is around the corner! Mary Kay has many wonderful gift ideas that will make anyone on your list smile. In celebration of this holiday I'm doing 20% off of everything! Mary Kay lipsticks and glosses make wonderful stocking stuffers. There are countless items for under $10 and gift sets galore. Create your own gift set and I'll package it up for you. If you would like to do a 12 days of Christmas for him or her, I'd be happy to help you put that together. Keep in mind that everything is 20% off.

Order by November 20 and receive and additional 5% off in addition to the 20%. Take a look at my website for more gift ideas and get your orders in. Please have orders in by the end of the month. Orders received in December will be harder to guarantee delivery by Christmas.

Posted by Bonnie Gets A Say at 1:48 PM No comments:

Book Catch Up and Stuff

Alright people, I'm a slacker. I admit it and that's the first step, right? I planned on catching up last weekend when I went to the Tour de Safford with my husband. (Whoever thinks it's fun to ride a bike for 104 miles, I question their sanity but a couple hundred people did it that day! More power to them.) Well, instead of catching up I was asked to help with registration which took up my entire free day. Oh well, such is life. The race went well and it was nice to get away.

Then this weekend I had my sister's baby shower and a Pre-Thanksgiving dinner since I've cancelled Thanksgiving this year (hoping I'll be in the hospital having a baby). Needless to say, I
haven't had much time in between.
So here's the plan. There's a great book I know just came out that I'm going to buzz about, then I'm picking a couple of books to do a review on. If I don't get to all my reviews this year, I
'm not going to stress. You can always take a look at the books I've read on my books read page. Then, depending on the length of this post, I might put my Mary Kay sale in this one or the next tomorrow. We'll see.
Anyway L. C. Lewis' fourth book Oh, Say Can You Can You See? I believe is out and going. Here's
the backliner blurb.
Although the British raids

have left Washington a devastated, blackened city, the battered Constitution has held and the presidency has survived!

But the struggling government has no home. The British saw to that. Gone is the Capitol and her magnificent library, the chambers of the Supreme Court, the President’s House, and every relic and document not secreted out of the city.
Next on the list of British prizes—the rebellious port city of Baltimore! A victory here would assure the Americans’ defeat, but a loss would dilute the importance of the destruction of Washington.
But has the raid on Washington stiffened the backs of the Americans? This is the question gnawing at the leaders on both sides.
The Willows women are mourning their absent men—gone to war, or wounded, or captured—as they await the birth of a blessed child.
Mere miles away, attorney Francis Scott Key embarks on a diplomatic mission that will leave an everlasting mark on America. Proving that a pen can be more powerful than a sword, Key records his fears and hopes—the fears and hopes of his embattled people—as he watches the bombardment of Baltimore while detained in the midst of the British fleet.
What changed in this noble man’s pacifist heart, empowering him to pen the powerful anthem, known today as “The Star Spangled Banner,” an epic poem that rallied a shattered nation to rise from its knees to claim the dream of “one nation under God?”
Experience the personal sacrifice of five families placed in the firestorm of the War of 1812, citizen
heirs of the sacrifice of the Founding Fathers.
It sounds like a wonderful book. I've had several family members read it and absolutely love the series. It is definitely on my list of books to read. Take a look and let me know what you think! Here's the book trailer.
Now to book reviews.

I've read three by Janette Rallison, Trial of the Heart, Deep Blue Eyes and Other Lies, and Masquerade. Trial of the Heart is a darling love story that
was a fun read that I just enjoyed. It is clean and just good fun about a cleaning gal who gets left a multi-million dollar vineyard. She then gets stuck with the family that hates her because she is talking about the vineyard into something else, believing she is fulfilling the wishes of the person who left her the vineyard. Just delightful.

Deep Blue Eyes and Other Lies threw me back into high school. I forget sometimes how cheesy high school was, however I loved how Rallison portrayed the real consequences of people's actions and how sometimes you can't solve everyone's problems. Good lessons learned in this book.
Masquerade is written under the name Sierra St. James. It's another fun romance. I loved the interaction of the characters with the two young children in the story. It was very realistic and made it for a good read that is also clean.
And now I'm amazed at how quickly my energy level depletes. So I'll do more later. Life shouldn't be as busy now. Ha, ha, ha. I think I've said that before.
Posted by Bonnie Gets A Say at 9:47 AM No comments: