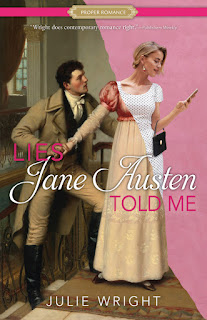 LIES JANE AUSTEN TOLD ME by Julie Wright. I love Julie not only as a person but as an author. She has such a fun way of writing that wraps you up in the story. This book is no exception. And I loved how she pulled in Jane Austen and Emma had to "break up" with her. I think we so often look for things to be exactly a certain way because of something we've seen or read, that it was good to see how someone moved past it. I loved Emma and Lucas journey and then when another player entered the field . . . it left me struggling for who I wanted Emma to end up with. Both guys were fantastic for her. It is a great read from cover to cover. I would highly recommend it.


Ever since Emma read Pride and Prejudice, she's been in love with Mr. Darcy and has regarded Jane Austen as the expert on all things romantic. So when it turns out that what her boyfriend Blake wants is more of a hook-up than a honeymoon, Emma is hurt, betrayed, and furious. She throws herself deeper into her work as CMO of Kinetics, only to find her job threatened when her boss brings in a consultant to help her expand the business to the East Coast. Her frustration turns to shock when that consultant turns out to be Blake's younger brother, Lucas.
Emma is determined not to fall for Lucas, but as she gets to know him, she realizes that Lucas is nothing like his brother. He is kind and attentive and spends his time and money caring for the less fortunate. But as perfect as Lucas seems, he clearly has his secrets. After all, there's an angry woman demanding money from him and a little girl who Lucas feels responsible for.
Realizing that her love life is as complicated as anything Jane Austen could have dreamed up, Emma must figure out the truth—and soon—if she wants any hope of writing her own "happily ever after" ending. 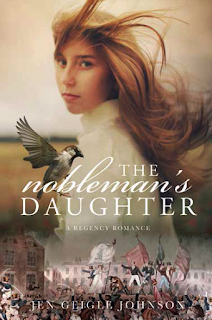 THE NOBLEMAN'S DAUGHTER by Jen Geigle Johnson. This was a really good read. It was a reminder of the sacrafices people are willing to make for things they truly believe it. It shows what how one person can make a difference. The relationship between Lady Amanda and Lord Nathaniel is fun to see develop and how they learn to trust each other. It's an amazing story that anyone would love.

While British high society primps and plays, the impoverished citizens of London languish. But there are those fighting for the freedom of common citizens—including two members of the aristocracy who secretly champion revolution. In the drawing rooms of the upper class, Lady Amanda and Lord Nathaniel flirt and tease with the best of them as she pretends to win every heart in London for sport, and he, to conquer them. But in truth, their flirtation is merely a facade designed to keep their clandestine actions hidden from the ton—and from each other. When Nathaniel presents himself as a potential suitor, the attraction between the two is undeniable—but the faces they portray to the world are not enough to win each other's hearts.
While their crusade for London's poor unites them more deeply than they could imagine, Amanda and Nathaniel struggle to trust one another with their true ideals and identities. But when the call to action leads Amanda into the path of danger, she can only hope that Nathaniel will see through her frivolous pretense. Because now, only the aid of the suitor she loves most—but trusts least—can save her.