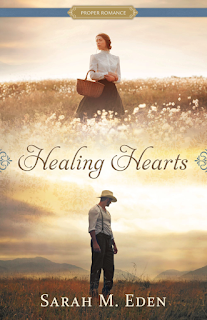 HEALING HEARTS by Sarah M Eden. I love Savage Wells and the people there. I love all their personalities and how they fight for one of their own. Add Miriam into the mix and it makes the town even better. She had her work cut out for her, winning over the townspeople after leaving their beloved Gideon at the alter, but she did it in the best possible way. This story also showed what it was like for those in the early medical field and how far we have come in learning and developing in both opinions as well as medical means. It is a fascinating story that will leave you turning the pages to find out what happens next and how Gideon and Miriam will make things work. I highly recommend this book to anyone.

For THE SHERIFFS OF SAVAGE WELLS review, click here.


Wyoming Territory, 1876
As the only doctor in the frontier town of Savage Wells, Gideon MacNamara knows his prospects for a bride are limited. The womenfolk in town are either too young, too old, or already spoken for. So, being a practical man, he decides to take advantage of the matchmaking service of the day—mail-order brides—and sends away for a woman with nursing experience.
When Miriam steps off the stagecoach in Savage Wells, she sees a bright future in front of her. But when the town—and Gideon—meets her, ready for a wedding, her excitement quickly turns to horror. Somehow Dr. MacNamara's message had gotten turned around. He didn't want a nurse, he wanted a wife. When she refuses to marry him, she finds herself stranded in Savage Wells with some very unhappy townspeople.
But Gideon is not like the other men Miriam has met. Embarrassed by the misunderstanding, he offers her a job, and the two begin an awkward—and often humorous—dance of gettting to know each other as they work to care for the people of their town.
Romance blossoms between the two, but when a former medical associate of Miriam's arrives in town, Gideon and the other townsfolk must rally to protect Miriam from a dangerous fate. Gideon and Miriam must decide if they are willing to risk their hearts for each other even as buried secrets are brought to light. 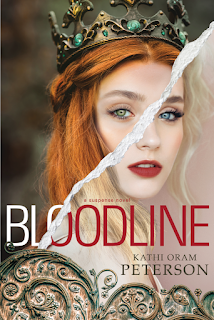 BLOODLINE by Kathi Oram Peterson. I loved the idea of this plot. A queen dying with a secret heir to the throne and all that coming to light in the modern era. Having been to many of the sites that were seen in the story in Scotland, I loved revisiting them. She did a wonderful job showing the many political viewpoints that are currently going on in Scotland as well. I enjoyed the story, but I found myself feeling like Skye was too weak of a character for me. She questioned too much after certain characters more than proved themselves, in my opinion. I really had a hard time with her the farther I got into the book. I did really like the twists toward the end and I would recommend it to others. I didn't feel completely done though at the end. I has me wondering if there will be a sequel.


France, 1371. The old Queen of France lies on her deathbed with a secret she will take to her grave: there is one true heir to the throne, one who would have the power to ally France and Scotland. But after her death, all that will be left are a few shreds of evidence revealing the stunning identity of her successor.
Flight attendant Skye Armstrong has heard the voice of warning before, and as she's returning home from London, she recognizes the feeling of dread that accompanies her sixth sense. Walking from the airport terminal to her car, she pauses in the middle of the road. Her hesitation gives a Good Samaritan the split second he needs to pull her out of the path of a speeding car, saving her life. But her misfortunes are just beginning. When she arrives home, she discovers that Auntie Marjorie has been kidnapped, and cryptic instructions have been left behind: Skye must retrieve the contents of a safe deposit box and deliver it to the captors . . .No police. Her feelings of dread return.
What Skye discovers in the bank box is baffling: a single page. The ancient document is certainly valuable, and with no time to lose, she goes to the rendezvous to discover the next step. A cell phone rings beneath a park bench. She answers the call, and on the screen is a picture of Auntie, unconscious. Now the kidnapper demands Skye find two more pages or her aunt will die.
What secrets are hidden within the illuminated pages, and who believes they are worth killing for? And what roles does the Good Samaritan play in all of it? 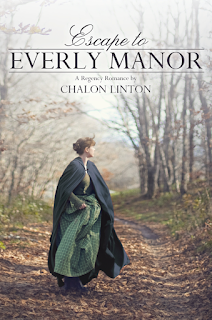 ESCAPE TO EVERLY MANOR by Chalon Linton. I really enjoyed this book. The "adventure" that Lizzy and Thomas went on had lots of twists and turns, and showed just how far a sibling will go to protect another sibling. There were times I wanted to shake Lizzy and tell her not to make the choice I knew she would make because of the drive to protect her brother. I wasn't sure how she would be able to get out of the situations and my heart hurt for her. It was a well done story that has a good ending. I would highly recommend this book to anyone who loves a good, adventure with romance in it.


Nineteen-year-old Lizzy and her young brother, Thomas, find themselves orphaned after a tragic accident claims the lives of their parents. Their estrange Uncle Cline arrives to claim his inheritance, and his roguish ways cast a shadow over the manor. Both the family estate and guardianship of his niece and nephew were left to him, and scheming Uncle Cline is determined to indulge his newfound wealth and rid himself of his charges. Desperate to save her brother form a dangerous life at sea, and herself from being married off to a detestable old gentleman, Lizzy knows there is only one choice left—they must run.
Lizzy and Thomas sneak away and find refuge in an abandoned cabin. There they remain hidden—until fate acquaints Lizzy with Mr. Barton, a charming gentleman who is immediately intrigued by the mysterious young woman. Concealing her identity, Lizzy is unaware that there is much more to this compassionate man than meets the eye. Through his kindness to herself and her brother, Lizzy begins to trust Mr. Barton. Soon Lizzy realizes he may be her best hope for a life in which she can live—and love—as she chooses . . .