LIES, LOVE, AND BREAKFAST AT TIFFANY'S by Julie Wright 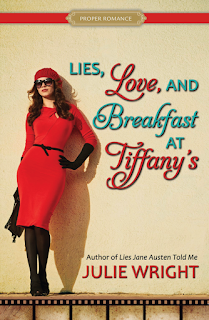 LIES, LOVE, AND BREAKFAST AT TIFFANY'S by Julie Wright. I should have known better than to start Julie's book when I didn't really have time to just sit and read. Less than a day later, I had devoured it. My kids came home from school too early and naps not long enough, but I couldn't read it fast enough. This was an incredible fun story. I always enjoy being where I haven't been and this book was all over that. I loved Silvia's drive, and Ben's loyalty and how everything turned out in the end. For a couple of chapters I thought I would be mad at the ending, but it ended perfectly. I highly recommend this book.

Women in Hollywood are just pretty faces. But Silvia Bradshaw knows that's a lie, and she's ready to be treated as an equal and prove her worth as one of Hollywood's newest film editors.
The LoveShe and Ben Mason had worked together as editors before Silvia got her big break, so he's the perfect person to ask for feedback on her first major film. But even as their friendship begins to blossom into something more, a lawsuit surfaces, jeopardizing both of their jobs—as well as their fledgling romance. Audrey Hepburn once said: "The most important things is to enjoy your life—to be happy—it's all that matters." Silvia agrees. Or she used to. It's one thing to risk her job and her heart, but can she really risk Ben's too? Does she have the right to make decisions for her own happiness when they affect so many other people?
The BreakfastWith everything to lose, Silvia meets Ben for breakfast at his favorite diner, Tiffany's, for one last conversation before the credits roll on true love. 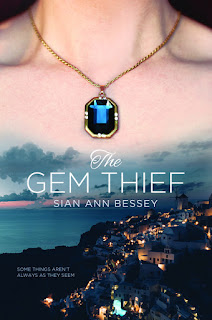 THE GEM THIEF by Sian Ann Bessey. This was a very engaging read. I sat back and enjoyed everything about it. Who wouldn't love a Mediterranean cruise. It was fun to read about an industry I really know nothing about, and to learn about it mixed with suspense, romance, and the location, you can't go wrong. I would recommend this book to anyone who loves to travel with some romantic suspense in the mix. I will be looking into more books by this author.


Gracie Miller is a small-town girl who has landed her dream job in New York City. As jewelry designer for one of the most prestigious jewelers in the world, she completed a particularly stunning piece, a custom setting for a large pink diamond. But when her billionaire client Mrs. Katsaros comes to repair a minor issue with the setting, Gracie is horrified to realize it is not the ring she created. Someone has forged her design, and the priceless diamond is gone.
Mrs. Katsaros has no desire to bring media attention to the jewelry heist, so she recruits her nephew, Quinn, and his FBI agent friend, Steve, to do some sleuthing off the record. When they discover that the missing ring is just one of many forgeries in the widow's collection, they look to Gracie for help. They need her to act the part of Quinn's fiancée. From the lights of New York to the shimmering islands of the Mediterranean, Gracie is swept into a thrilling hunt. But amid the search for the elusive thief, she and Quinn find themselves increasingly distracted by their growing feelings for each other. What neither realizes is how close the danger lies and how serious the vendetta is—because, apparently, it is worth killing for.