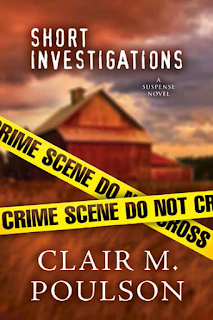 SHORT INVESTIGATIONS by Clair M Poulson. This was a good suspense novel. There wasn't anything that was too intense, but it kept me on my toes, trying to figure out who did it. It was easy to like both Rhett, Max, and Patches, and there wasn't too much romance involved. Sometimes I get annoyed with the romancey side of things in the middle of a suspense novel, but things were just right in this one. There were some predicatable twists and some not so predicatable. I would recommend this book to anyone who loves a good suspense with some romance in it.

In the sleepy town of Heber, a strange 911 call is made to report an unthinkable crime: someone has murdered a woman . . . and her body has been found in Rhett Ketchum's barn. Rhett, a well-known rodeo cowboy, is placed firmly at the top of the suspect list—the only problem is, he's innocent. As officers search tirelessly for the evidence needed to lock him up, Rhett takes matters into his own hands.
Max and Patches Fisher are the father-daughter duo behind the unconventional PI firm Short Investigations, and they agree to undertake the task of proving Rhett's innocence. Soon the list of suspects begins to grow, and Rhett feels a glimmer of hope—and an undeniable attraction to Patches. But when the officers on the case become targets themselves, it seems they may be the ones in need of protection. As events take a deadly turn, it's up to Max and Patches to uncover the truth before time runs out.