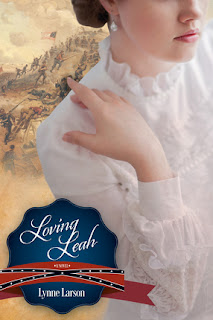 LOVING LEAH by Lynn Larson. This was an interesting read that really didn't go the way I expected it to. In a lot of ways I felt like it was the main character reliving the past and telling the story for a good portion of the book. Then as it was getting exciting and harder to put the book down, the story was being lived by Ethan (which is the way I prefer to read stories).

The history that was told through this story was heartbreaking and something I knew nothing about. That being said, I was disappointed in the ending. Some things were resolved but I was left with more questions than satisfying ends. However, it is a good historical read if you like a story about a piece of history that is not well-known.


Caught in the middle of a massacre in Lawrence, Kansas, during the Civil War, Leah Donaldson, a twenty-year-old Mormon governess, must risk everything to save two children in her care—and she lives to pay dearly for the decision. Young Ethan Pace loves Leah and can hardly stay still as she is taken away by the enemy for refusing to reveal where he and his sister are hiding.
Five years later, Ethan desperately searches for her, trying to reconcile all that has happened and grappling with his feelings for her. Still idealizing Leah, he hopes she has survived and that he can help her get to Zion and her people. But after everything she's been through since they last met, will Leah overcome her regrets and allow love into her life? Will she come to see Ethan as the caring man he has become rather than the lovesick boy she once knew?

*A review copy was provided by the pulbisher in exchange for an unbiased review. 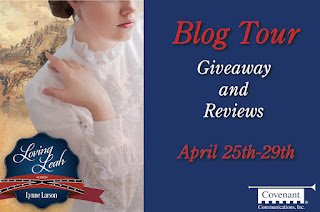 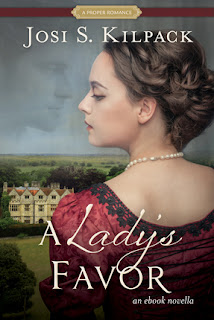 A LADY'S FAVOR by Josi S Kilpack. This was a delightful read. It had me smiling through the entire novella. The first chapter I felt was a little info dumpy, but the rest of the story flowed very beauitfully and I couldn't put it down. This is a wonderful, quick (couple of hours), clean read that any romantic would love. I highly recommend it.

Lord Strapshire is the most-eligible bachelor in town, and he has set his sights on the lovely Bianca Davidson. It’s too bad that Bianca finds him to be an insufferable boor. In order to deflect his attention, Bianca plans to ask Mathew Hensley to pretend to court her. The problem is, Bianca hasn’t spoken to Mr. Hensley since they were both involved in a particularly embarrassing incident years before. But he owes her a favor, and Mr. Hensley might be Bianca’s only hope.

*I received a copy from the publisher in exchange for an honest review.
Posted by Bonnie Gets A Say at 8:03 PM No comments: 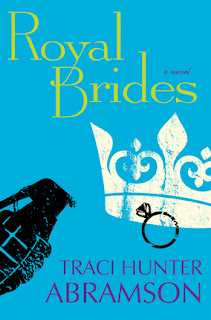 ROYAL BRIDES by Traci Hunter Abramson. I have loved the other two books in this set and was very excited when this one came out. It has not disappointed in any way. The opening had me hooked within a few pages and the fast pace continued through most of the novel. It felt like it slowed just a bit about three quaters of the way through, but that could have been because I was excited and anticipating the ending. The characters are fantastic as well as the plot, setting, and really everything about the story. I would highly recommend this to any and everyone who loves a good suspence/mystery with a bit of romance.

In this eagerly anticipated companion novel to Royal Target and Royal Secrets,readers are invited back to the shimmering Mediterranean paradise of Meridia, where two royal weddings in a year are more than stressful—they're deadly...
Lovely Meridian native Noelle Saldera years for adventure, but as the daughter of palace servants, working at Prince Stefano's royal wedding may be as exciting as her life will get. But her options change drastically when she finds herself in the unlikely position of diffusing a bomb at the ceremony and being enlisted as the newest member of Meridian Intelligence—another wedding is in the works, and there can be no more close calls when Prince Stefano's brother, Garrett, walks down the aisle.
The bombing attempt at the first royal wedding leaves few clues as to the assailant's identity. Desperate for answers, Meridian officials enlist CIA agent Jeremy Rogers to prevent a repeat occurrence at the upcoming nuptials. The beauty of the plan: the bride is Jeremy's sister, so his cover is foolproof. What no one could anticipate is the instant connection between Jeremy and Noelle. Now, with their hearts on the line, the pair must work together to stop a seemingly unstoppable enemy before time runs out.

*I received a copy from the publisher in exchange for an unbiased review. 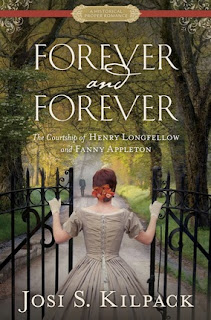 FOREVER AND FOREVER by Josi S Kilpack. I had a harder time getting into this novel than I expected to. Once I was able to fall into the story I enjoyed it though. It was fascinating to learn about the different social classes and how those played a part in the thought processes of those days. The courtship of Henry and Fanny as a delight to read. I would recommend this clean read to any and everyone who loves a sweet love story.

It's 1836, and nineteen-year-old Fanny Appleton, a privileged daughter of a wealthy, upper-class Boston industrialist, is touring Europe with her family. Like many girls of her day, she enjoys the fine clothes, food, and company of the elite social circles. But unlike her peers, Fanny is also drawn to education, literature, and more intellectual pursuits. Published author and poet Henry Wadsworth Longfellow is also touring Europe, but under much different circumstances. Recently widowed, he is gathering research for a new publication that he hope will secure his professorship at Harvard College. Befriended by the Appleton family while visiting Switzerland, Henry is introduced to Fanny and sees in her a kindred spirit, a lover of language and literature and high ideals. He is in love. Fanny, however, is uncertain. He is from a much lower social class and is older than she is. How could such a relationship ever thrive? Could a book of Henry's poetry, personally delivered, persuade Fanny to believe in a love that lasts forever and forever?

*A review copy was provided by the publisher in exchange for an unbiased review.
Posted by Bonnie Gets A Say at 9:02 AM No comments: 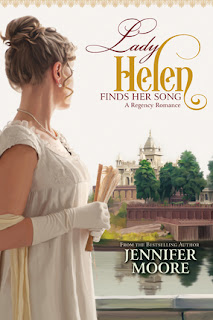 LADY HELEN FINDS HER SONG by Jennifer Moore. I really enjoyed this story. I love being in a different part of the world that isn't always talked about. I love that Helen was able to see the beauty in things around her even though there were ugly things happening. I enjoyed watching the relationship grow between Captain Rhodes and Lady Helen. I did have a hard time believing the relationship between Lieutenant Bancroft. There wasn't much time spend on them together and he seemed to pop up when it was convenient rather than an integral part of the story. This is a great read for anyone who loves a good adventure with romance. I'd highly recommend it.


Spring 1813The exotic splendors of India are legendary, and the colorful sights of her new home in Calcutta immediately captivate eighteen-year-old Lady Helen Poulter. Whereas many of her fellow British expatriates despise the culture they see as barbaric, Helen sees excitement int he unusual locale. it is in this vibrant, bustling city that she finds a kindred soul in Captain Michael Rhodes, an Englishman whose lifelong love of India runs deep. Their friendship quickly grows, yet despite their undeniable connection, she could never think of Captain Rhodes as more than a dear friend.
Her love, in truth, has been captured by dashing British Lieutenant Arthur Bancroft. This handsome soldier represents the embodiment of all she's dreamed of in a husband. Preoccupied by her growing affections, Helen never dreams that beneath the glamor o the city, hostilities are reaching a boiling point. When battle ultimately threatens both of the men in her life, she must make a choice: pursue the man who symbolizes her British past, or let herself love a man who promises an unknown future in the land she loves. But amid the casualties of war, will her declaration of love come too late?