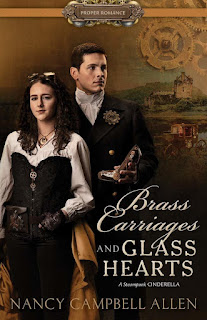 BRASS CARRIAGES AND GLASS HEARTS by Nancy Campbell Allen. What a fun addition to the Proper Romance Series, and to the other Steampunk fairy tale retells Allen has already done. I will admitt I had to really think toward the end of how this story was based on Cinderella, but once I figured it out, it was truly well done. I loved Emme and Oliver. They were the perfect nemeses. I loved seeing characters from previous novels. I really loved everything about this story. The crazy situations. How things worked out in the end. It was a well done story that anyone who loves romance mixed with thrills, suspense, and adventure will love. I highly recommend it.

A steampunk retelling of Cinderella.
Emmeline O’Shea has been an outspoken advocate for the shapeshifter community, which has come under unjust attack from a political body known as the PSRC (Predatory Shifter Regulations Committee), and her robust efforts have landed her a prestigious position as the spokesperson for the International Shifter Rights Organization. She has been selected to give the final address in Scotland before they vote on legislation that will grant protective rights to the shifter community. Because she is fundamentally changing the laws, she is also receiving death threats.
Oliver Reed is a by-the-book detective-inspector who has dealt with Emme’s borderline-illegal activism in the past, and there is little love lost between the two. When his superior tasks Oliver with guarding Emme around the clock to keep her safe until the summit is over, he is frustrated. He has several open cases requiring his attention, and his spare time is occupied with chasing down leads about the whereabouts of his brother, Vincent, a rogue vampire bent on causing trouble in Scotland.
When their airship is hijacked, Emme and Oliver are forced to parachute away before they exit British soil. They take refuge in Emme’s family’s hunting lodge where Oliver is introduced to her abusive stepsisters.
Together the pair must make their way to Edinburgh so as not to miss the summit meeting where Emme will be key in helping to pass legislation that will disband the corrupt PSRC. But between her vindictive sisters and Oliver’s rogue vampire brother, they face danger at every turn, not to mention dealing with their growing attraction for each other.
When Emme is kidnapped – leaving behind only one shoe as evidence – Oliver must find her before it’s too late – and the summit ends at midnight.
Posted by Bonnie Gets A Say at 4:00 AM