HER QUIET REVOLUTION by Marianne Monson 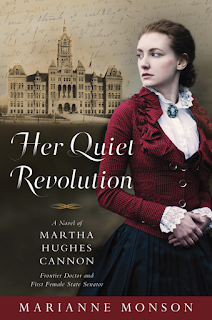 HER QUIET REVOLUTION by Marianne Monson. The was an incredible read. I was very surprised. Normally I have a difficult time getting through novels such as this, but HER QUIET REVOLUTAION had me captivated from the first few pages. I will admitt that I wasn't quite sure how the first chapter fit in until I realized it was the little girl that the story was about. At first, I expected the story to be about the mother in the first chapter. Once that connection was made, I was fascinated with what Martha accomplished and how she went against the norm of the day. She did so much for so many people. She helped so many people, and then after making the choice of whom she would marry, how that lead her down a different road. It was a fantastic read that I've already told many people about. I highly recommend it to everyone.


Based on the life of a pioneer woman who overcame tremendous odds, Her Quiet Revolution tells the true story of Martha Hughes Cannon: Wife. Mother. Physician. Senator. Suffragist. Polygamist.
When her baby sister and her father die on the pioneer trail to Salt Lake City, Mattie is determined to become a healer. But her chosen road isn’t an easy one as she faces roadblocks common to Victorian women. Fighting gender bias, geographic location, and mountains of self-doubt, Mattie pushes herself to become more than the world would have her be, only to have everything she’s accomplished called into question when she meets the love of her life: Angus Cannon, a prominent Mormon leader and a polygamist.
From the American Frontier to European coasts, Martha’s path takes her on a life journey that is almost stranger than fiction as she learns to navigate a world run by men. But heartache isn’t far behind and she learns that knowing who you are and being willing to stand up for what you believe in is what truly defines you.
Her Quiet Revolution is the story on one woman’s determination to change her world, and the path she left behind for others to follow.
Posted by Bonnie Gets A Say at 4:00 AM