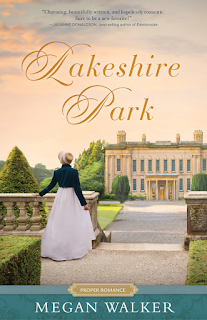 LAKESHIRE PARK by Megan Walker. I enjoyed this story. It showed a different side of the regency era and how if you didn't have an inheritance or a relative willing to support you, there was not much that could be done. I really felt Amelia's drive to make sure her sister was taken care of. I felt the urgency and frustration when Mr. Wood got in the way. I felt how Amelia could tell she had no choice but to play by his rules in order to take care of her sister. I also felt her heart softening. Once everything is taken, I can imagine how hard it would be to give up the only thing she had left to claim. It was satisfying, if that's a good way to describe it, to what things unfold. It showed a true journey of the heart, including the heartbreak along the way. I would recommend this book to anyone.


Brighton, England 1820
Amelia Moore is worried about her and her sister's future. With their stepfather's looming death, she knows they'll soon be on their own—without an inheritance, home, or penny to their names. When an invitation arrives to join a house party at Lakeshire Park, Amelia is eager to encourage a match between her sister, Clara, and Sir Ronald. At least then, she'll know her sister will be taken care of.
Little does she know that another guest, Mr. Peter Wood, is after the same goal for his sister. Starting with a quarrel over a glove, Amelia and Peter begin a rivalry—one that Amelia has no choice but to win. But competing against Peter—and eventually playing by his rules—makes Amelia vulnerable to losing the only thing she has left to claim—her heart.
Posted by Bonnie Gets A Say at 4:00 AM