PRAYING WITH THE ENEMY by Steven T Collis 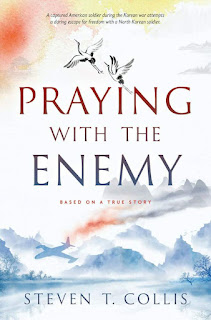 PRAYING WITH THE ENEMY by Steven T. Collis. This fantastic read was released this week. A historical fiction about the Korean War with the viewpoint from four different people was so well done. I was drawn in from chapter one and couldn't put it down. The feelings and opinions of each person were so strong and in a way relatable. War is not for the faint of heart but when you are able to experience it through the eyes of another, it makes at least me feel that much more grateful for our freedoms and those who have sacrificed to maintain our freedoms. What a beautiful story brought to life. It is one every person should read.

When pilot Captain Ward Millar is forced to eject over enemy territory in North Korea, the ejection explosion snaps both of his ankles. Unable to walk, he is easily captured by North Korean and Chinese soldiers who interrogate, threaten, and starve him for strategic wartime information. He feeds the enemy false information while plotting his escape. But it’s only a matter of time before they discover his lies. He knows it will take a miracle to gain his freedom, but his previous self-reliance on his own capabilities has never included appealing to a higher power. If only he had faith like his wife, Barbara, whose firm belief in God can move mountains.