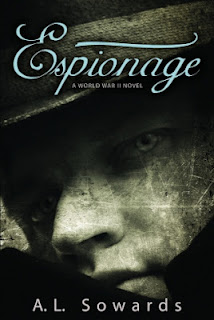 ESPIONAGE by A. L. Sowards book tour hosted by The Book Bug. This book was definitely action packed. I enjoyed the historical aspect of it, and it reminded me of all the people went through during WWII. It was a good read, with likeable, realistic characters that hooked me from the beginning. It slowed down a little bit in the middle, but I had to see if my guesses were correct, so I turned the page. Then the end sped up and it became an easy read. I can recommend this one to almost anyone, especially those who love historical books. Due to the acurate war situations, it wouldn't be something for younger readers. Take a look at the first chapter, here.


:):):)
France, 1944: Nobody expects Peter Eddy to survive his first commando mission—to retrieve a code book stolen by the Nazis—so when he does come back alive, his success is rewarded with an even more daunting assignment. Partnered with French Resistance leader Jacques Olivier, Eddy must identify which of three Allied contacts in Calais is a double agent and use the traitor to help implement a strategic Allied diversion that might win the war. Eddy and Olivier secretly cross the English Channel to confront their suspects one at a time, but what appears to be a clean assignment soon turns disastrous, and a shocking betrayal leaves Eddy in the grip of the Gestapo. With the courageous aid of Olivier and his sister, Genevieve, Eddy evades his captors with a dangerous escape plan. But as the Allied invasion approaches, treachery in the least likely places leads to fresh graves in the bloodied European soil—and only the power of loyalty and love can transform tragic endings into new beginnings.


Now for the interview and GIVEAWAY! You get to choose if you'd like a hard copy or an ecopy, (unless you are outside the US. Then an ecopy will be sent to you).

It is in your best interest to leave Seperate comments for each entry. Random.org will choose the winner on May 5th. Please have all enteries left by midnight on May 4th. The winners will be notified and will have 48 hours to respond before new ones will be chosen.

What made you decide to become a writer?
I’ve loved to read since I learned how to, and I think my love of reading turned into a love for writing. For decades I’ve thought up stories when I’m trying to fall asleep or when I’m bored. Writing down what was in my head was the logical next step.
Who inspires you?
I could write out a long list, because I’ve found that most people, when you get to know them, are amazing and inspiring in their own way. For this post, I’ll just talk about my daughters. They find joy in simple things, love freely, enjoy learning, and help me see the big picture. They also make me laugh every day. They inspire me to be a better person and good example for them—because I know they’re watching closely.
What would you like your readers to get out of your writing?
First of all, a thrilling, “couldn’t put it down” read. I want them to feel like they know and care about the characters. I also hope they’ll learn something new about history and maybe something true about life.
Where did this idea come from?
It started with a high school history lesson about the D-day deception schemes the Allies used during WWII to convince the Germans that the big invasion was going to come in the wrong place. I thought it was so cool—just like something out of a Tom Clancy novel, only it really happened. The rest of the book grew from there.
Who was your favorite character to develop?
It’s hard to pick a favorite, but Genevieve was a lot of fun. I like that she’s not the typical heroine. She can speak three different languages, and make a bomb just as easily as she makes bread. She’s kind and brave and good but also has a feisty streak.
I also love Peter. I think he’s a character that most readers can relate to. He’s likeable, even though he’s got a few flaws and some bad habits. He’s tough and determined, and sometimes he makes mistakes, but he has good intentions. It’s been fun in this book and in the next books to watch him improve himself and grow through his trials.
Any advice for aspiring authors?
Don’t give up. But if things aren’t working out, try something different. Go to writer’s conferences, read books on writing, join a critique group. And have fun with your writing—if you don’t enjoy writing it, readers probably won’t enjoy reading it. That doesn’t mean writing isn’t a lot of work, but it should be pleasant work.
What can we expect next from you?
I just submitted my second book to my publisher (Covenant). It’s a sequel, though I’ve tried to write it so it can be a stand-alone book. It includes some of the same characters and some new ones. Now I’m working on book three, also set during WWII, involving characters from Espionage and book two. After that I have a dozen ideas—the books I’m most eager to write are also WWII spy thrillers.
Where can we purchase your book?
Espionage is available at most LDS bookstores and online at Amazon, Seagull, Deseret Book, and Barnes & Noble. My dad is also selling copies out of his dental office, for anyone living in Grant County, Washington.
THANKS!
Posted by Bonnie Gets A Say at 5:00 AM